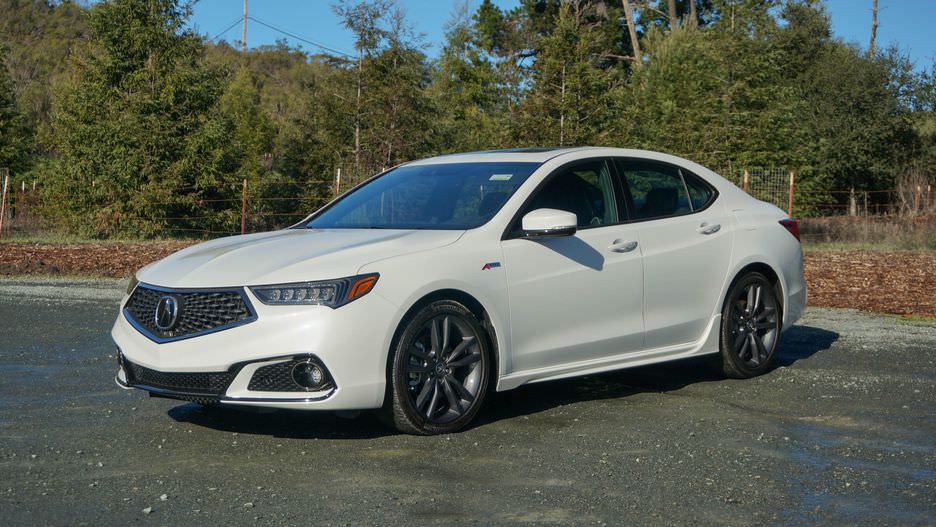 The 2018 Acura TLX is a pretty good luxury sedan. It's reasonably powerful, quiet and well-appointed and its available SH-AWD option is a fantastic performance all-wheel drive system.

Unfortunately for the TLX, it doesn't exist in a vacuum. It lives right in the middle of the midsize premium-to-luxury sedan segment where it faces stiff competition from the likes of Infiniti, Lexus, BMW, Audi and more. Even brands like Mazda and Honda are stepping their game up and edging into the premium sedan market, slowly encroaching on the TLX's territory. Among these ever more numerous peers, the Acura has a tougher time standing out.

But it puts up a valiant fight with this 2018 mid-cycle refresh with a solid loadout of standard tech and driver aid features, some solid upgrades in the form of an A-Spec performance package and a value that's hard to ignore.
290 horsepower V6

The TLX comes standard with a 206-horsepower 2.4-liter four-cylinder engine making 182 pound-feet of torque and mated to an 8-speed dual clutch transmission that also features a torque converter to smooth out around town performance. The four-banger is a front-wheel drive only affair and the best value in the lineup starting at $33,000.

However, if you've gone to the trouble of choosing the 2018 TLX over the 2018 Honda Accord, you're probably here for the V6. Check that box to step up to a 290 horsepower six-cylinder engine mated to a 9-speed automatic transmission with either front-wheel drive and rear-wheel steering or with Acura's Super Handling All-wheel Drive (SH-AWD) system. Our example featured the latter.

290 horsepower is a fairly significant advantage on-paper and on-the-road over the TLX's competition, most of which have stepped down to turbocharged four-cylinders when priced competitively with the V6's $36,200 (or $38,200 with SH-AWD) starting point. However, in daily driving it doesn't really feel much more powerful, partially due to the engine's reluctance to rev and partially to transmission, which is like a fun damper unless you take matters into your own hands with the paddle shifter.

At 267 pound-feet, the V6 has a smooth torque delivery that's good for relaxed driving, but the turbo-fours that the competition has switched to tend to make more torque at lower RPMs and rev more freely, which also somewhat explains the Acura's less lively street performance.

There are various "Integrated Dynamic System" driving modes -- Econ, Normal, Sport and Sport+ -- that adjust the performance of the transmission, steering, throttle response and all-wheel drive system, but I struggled to really feel much difference between the modes under most conditions.

The TLX V6 SH-AWD is estimated by the EPA to cruise for a combined 24 mpg (21 city and 30 highway). The addition of the A-Spec upgrades to our tester costs the sedan an mpg across the board, bringing the combined estimate down to just 23 mpg. Those aren't terribly impressive numbers and more cost conscious TLX buyers should at least consider the the four-cylinder model's slight economy advantage at 27 mpg combined (23 city and 33 highway).
A-Spec performance package

Our TLX featured the A-Spec performance and styling package available to both the front and all-wheel drive V6 models. In addition to A-Spec badging inside and out, the package adds dark exterior trim, unique front and rear bumpers, larger exhaust tips and red accents around the cabin.

On the performance side, A-Spec models feature larger 19-inch wheels shod with meatier 245mm wide tires. The suspension gets stiffer springs with firmer dampers and the rear stabilizer bars are beefier to help prevent roll when cornering.

If you've opted for front-wheel drive, then the P-AWS rear steering gets amped up to kick in faster and more aggressively. Opt for SH-AWD like we did and the front steering gets beefed up for a quicker ratio and a heavier on-center feel.

Overall, the A-Spec models should feel tighter, firmer and more responsive than the standard suspension, but even with the upgrades the TLX felt soft and detached from the road beneath it. On the highway, numb steering and the wide tires' tendency to follow ruts in the road meant I had to work hard to just keeping the sedan centered in my lane. Tucking into a quick lane change or squeezing a bit of extra speed out of an off-ramp was satisfying enough, but the TLX mostly felt too mushy to take the A-Spec designation too seriously.
Super Handling All-Wheel Drive

My opinion of the 2018 TLX's performance really turned a corner, so to speak, when I got it away from the boulevards and interstates and chucked it into a few hilly corners. It was here that I got a feel for how the SH-AWD system creates a fairly engaging and dynamic ride.

Even the SH-AWD equipped TLX model features a front-wheel-biased torque split. There's always some power heading to the rear wheels, but under most cruising conditions the lion's share of available torque flows through the front wheels. When accelerating or if slip is detected, the SH-AWD system can send up to 70-percent of the available torque to the rear and, when turning, it can torque vector to 100-percent of that rear grunt laterally to either rear wheel. This is the magic of the SH-AWD system.

When cornering hard, the TLX actively shifts power to the outside rear wheel, rotating the sedan actively into the turn rather than letting the nose push out into understeer. This means that I could maintain more speed and steady throttle through most turns rather than slowing to avoid understeer. Pick the right gear with the paddles to take the transmission's weird shift program out of the equation and you've got a performance formula that's surprisingly grin-inducing. At least, up to a certain point?

Push too hard and the TLX's weight and scale start to become more and evident. It's a big gal and the SH-AWD system can only do so much before physics steps in and tells you to calm right on down by pouring on all of that understeer that SH-AWD had been cancelling out. Plus, there's a good bit of body roll and pitch when driving with zest, even with the A-Spec upgrades. And though the steering is quite responsive, it doesn't offer much in the way of feedback.

I think Roadshow's Chris Paukert put it best when he said that "it would be tough to label the TLX a sport sedan."